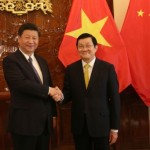 The meeting comes two months before elections in Taiwan, which the anti-Beijing opposition Democratic Progressive Party (DPP) is expected to win.

The DPP has criticised the meeting, saying it is a threat to the island’s democracy.

An historic handshake is expected to be the main achievement of the meeting, with no major announcement or agreement planned.

Mr Ma has said he will raise concerns about how China has managed to isolate Taiwan in international affairs. Read More