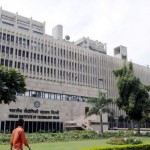 Vying for an entry in the Guinness Book of world Records, 2000 students from schools across the national capital on Monday assembled at the sprawling lawns of Indian Institute of Technology here to conduct ‘world’s largest practical science lesson’.

Dressed in white lab coats, the students streamed into a giant tent pitched by the administrative block in IIT Delhi to take a shot at the world record for the highest number of students to conduct an experiment simultaneously at the same venue. Northern Ireland is the current record-holder with 1,339 students.

The participating students, with excitement writ large on their faces, got a pep talk from Union Science and Technology and Earth Sciences Minister Harsh Vardhan and Union HRD Minister Smriti Irani ahead of the lesson. Read More