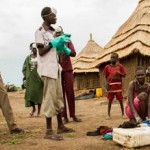 World Toilet Day (WTD) was observed on 19 November 2015 across the world with the theme Sanitation and Nutrition.
The aim of WTD is to raise awareness about the people in the world who don’t have access to a toilet, despite the fact that it is a human right to have clean water and sanitation.The effort of the WTD in 2015 was to draw the world’s attention to the importance of toilets in supporting better nutrition and improved health.
WTD has been celebrated by the World Toilet Organisation since 2001. It was later became an official UN day on 24 July 2013 as the 67th session of UN General Assembly approved it through the Sanitation For All resolution…Read More