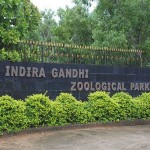 Indira Gandhi Zoological Park in Visakhapatnam will be funded $7 million for restoration and development as a world-class international ecological park by the World Bank. This is for the first time that the World Bank will be funding a zoo. Indira Gandhi Zoological Park in Visakhapatnam was heavily damaged by the cyclone Hudhud in 2014. The four coastal districts of Visakhapatnam, Srikakulam, Vizianagaram and East Godavari are expected to get $20 million for forest restoration and disaster prevention measures.

Under the Andhra Pradesh Disaster Recovery Project, the World Bank in-principle has sanctioned 250 million dollars for its restoration. The beach city zoo suffered very severe damage when winds reaching a speed of 250 km per hour blew after Cyclone Hudhud made its landfall near Kailasagiri hills close to the zoo in October 2014.