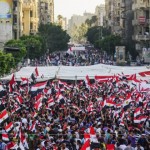 World Bank on 21 October 2015 released a report entitled Inequality, Uprisings, and Conflict in the Arab World as part of the Middle East and North Africa Region (MENA) Economic Monitor series.

The report explains widespread inequality in the society despite overall growth and development of the nations as a whole as the possible answer to Arab inequality puzzle-what drove people to the streets in the MENA despite the region making steady progress?

Findings of the Report

Judging by economic data alone, the revolutions of the 2011 Arab Spring should have never happened.

There are ample evidences showing progress toward eliminating extreme poverty, boosting shared prosperity, increasing school enrollment, etc. in the decades prior to the Arab Spring.

Still, in late 2010 and early 2011, millions of people poured onto the streets of major cities in the Middle East and North Africa (MENA), calling for change.

Growing and broadly shared dissatisfaction with the quality of life—evident in perception data from value surveys but not in objective data—were the main reasons for the uprisings.

Ordinary people, and especially those from the middle class, were frustrated by their deteriorating standards of living due to a lack of job opportunities in the formal sector, poor quality public services, and the lack of government accountability.

By 2010, people in the countries that became most involved in the Arab Spring—Syria, Libya, Tunisia, Egypt, and Yemen – were among the least happy in the world.

Dissatisfaction was widespread but more pronounced for the middle 40 percent of the population than the bottom 40 percent.

Further, wealth disparities, which are typically higher than income disparities, could have been a factor in the Arab Spring uprisings that was not captured in standard economic data…Read More