Winners of 2015 Nobel Prize in Physics

Winners of 2015 Nobel Prize in Physics 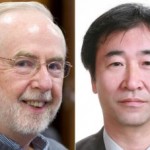 Takaaki Kajita (Japan) and Arthur B. McDonald (Canada) have jointly won the prestigious 2015 Nobel Prize in Physics. The Royal Swedish Academy of Sciences has selected them for their key contributions to experiments showing that neutrinos change identities. They individually have discovered neutrino oscillations and shown that neutrinos have mass.

Neutrinos were first proposed by Swiss scientist Wolfgang Pauli in 1930. They are electrically neutral, weakly interacting elementary subatomic particle with half-integer spin. They are the second most widely occurring particle in the universe after photons which are the particles makingg up light. Read More