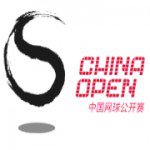 The 2015 China Open (Tennis) was the 17th edition of the tournament for the men (19th for the women). It was played on outdoor hard courts in Beijing and was part of ATP World Tour 500 series on the 2015 ATP World Tour.