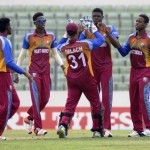 The Indian under-19 cricket team’s quest for an unprecedented fourth World Cup title ended in disaster today as the West Indies out—witted the Rahul Dravid-coached side by five wickets in a tense summit clash to clinch the coveted trophy for the first time since its inception.Put in to bat by the Caribbeans on a green-top amid overcast conditions, the script went completely awry for the Indians, who were dismissed for 145 in 45.1 overs with Sarfaraz Khan’s 89-ball 51 being the only noteworthy contribution.