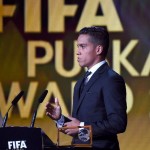 Wendell Lira won the 2015 FIFA Puskas Award for his spinning bicycle kick while playing for Goianesia in the Brazilian Goias state championship. Lira, 27, upset the favoured Lionel Messi, who was a finalist for his goal for Barcelona against Athletic Bilbao in May’s Copa del Rey final.

The Brazilian was honoured at the Ballon d’Or ceremony on Monday in Zurich, where Messi later took the top honour as World Player of the Year. “It is an honour to be here to get know famous players I’ve only seen on the screen before,” Lira said in accepting the award. “I thank my family and all those who voted for me. I should like to thank my wife and my daughter.”