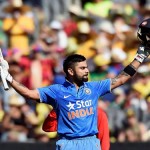 Virat Kohli became the fastest to register 24 hundreds and pile up 7,000 runs in one-day cricket, surpassing the twin milestones in just his 161st innings. The top-order batsman got the better of the Australian bowling attack with a run-a-ball knock that was studded with seven fours and two sixes. Kohli, who has been in top form recently, had scores of 91 and 59 in the first two ODIs. Coming into this match, he needed only 19 to overtake AB de Villiers, who reached the landmark in 172 matches and 166 innings.

The South African captain needed nearly a decade to get there while Kohli did it in less than eight years. Former India captain Sourav Ganguly held the record for a short time but he needed 180 ODIs and 174 innings to reach 7000 runs.

Read More At The Times Of India