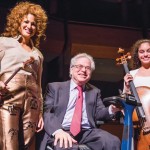 The $1 million prize, launched in 2014 and dubbed by Time magazine as “the Jewish Nobel,” is awarded by the Genesis Prize Foundation to those who have made a significant contribution to humanity and inspired others with their involvement and dedication to the both the Jewish community and Israel.

A child prodigy, Perlman, 70, trained first at the Academy of Music in Tel Aviv before studying at New York’s Juilliard Academy. Since then, the virtuoso violinist and conductor has played with nearly every major orchestra in the world, notably taking part in the Israel Philharmonic’s first concerts in the Soviet Union in 1990. Read More