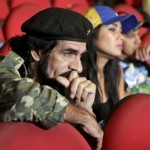 The opposition in Venezuela has won a majority of seats in the National Assembly, overturning nearly two decades of dominance by the Socialists of President Nicolas Maduro.

It is the worst-ever defeat for the leftist movement founded by former leader Hugo Chavez in 1999. Read More