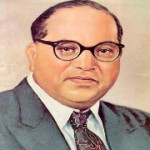 The Department of Posts has released a Commemorative postal stamp on father of Indian Constitution Dr. B.R. Ambedkar as part of his 125th Birth Anniversary celebrations. It was released jointly by the Union Minister Social Justice & Empowerment Thaawar Chand Gehlot and Union Minister for Communication & Information Technology Ravi Shankar Prasad.

The yearlong celebrations aim to make the world aware about the life and the work of Dr. Babasaheb Ambekdar who is often considered as a champion of the underprivileged. Read More