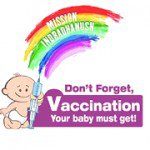 Union Ministry of Health and Family Welfare has launched the second phase of Mission Indradhanush to achieve full immunisation of children below two years. In the second phase, the week-long programme will be implemented in 352 districts of the country.

Mission Indradhanush depicts 7 colours of the rainbow which aims to cover all those children by 2020 who are either unvaccinated or are partially vaccinated against 7 vaccine preventable diseases. These 7 diseases are Diphtheria, Whooping cough, Tetanus, Polio, Tuberculosis, Measles and Hepatitis B.