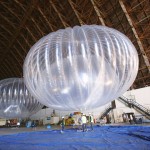 In his first visit to the country, Google’s newly-appointed chief Sundar Pichai managed to secure support for the company’s ambitious Loon project in the government. Union minister for telecom and IT Ravi Shankar Prasad said that the government was in principle agreeable to pilots of Google’s Project Loon.

After meeting Pichai in New Delhi on Wednesday, Prasad said he had also proposed a partnership with state run BSNL for Project Loon. Under the project Loon, Google has proposed to provide internet connectivity in hard to access areas of the country from balloons floating at a height of 20 km using LTE or 4G technology. Read More