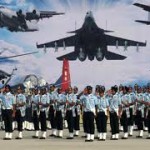 Union Government has approved induction of women into the Fighter branch of Indian Air Force (IAF). Henceforth, women are eligible to get inducted in all branches and streams of the Air Force. Union Defence Ministry has taken this decision keeping in view the aspirations of Indian women and in line with contemporary trends in Armed Forces of developed nations. Under the new rules, the first women fighter pilots would be selected from the batch which is presently undergoing flying training at Air Force Academy in Hyderabad, Telangana. These women pilots will be commissioned into the fighter stream in June 2016 after successful completion of initial training. Thereafter, they would undergo advanced training for 1 year and would enter a fighter cockpit by June 2017. Presently, there are around 1,500 women in the IAF including 94 pilots and 14 navigators. IAF is also inducting women in Transport and Helicopter streams…Read More