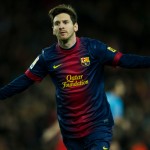 Lionel Messi was recently named the best footballer on the planet. The Barcelona star Lionel Messi has set his sights on an even bigger prize – the end of poverty. The Argentine and Colombian singer Shakira head a list of 17 well-known names recruited by the United Nations to promote its Sustainable Development Goals (SDGs). The world body’s objectives include the eradication of poverty by 2030, the fight against climate change and universal access to education and health. Messi and Shakira are already goodwill ambassadors for UNICEF, the UN Children’s Fund.

Messi is the only football player in history to win the FIFA Ballon d’Or five times, four of which he won consecutively, and the first player to win three European Golden Shoes.