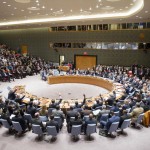 The United Nations Security Council (UNSC) has unanimously adopted a resolution No. 2254 outlining a peace process in Syria. The resolution endorses an international roadmap for a Syria peace process to end Syria’s five-year-long civil war.

The resolution endorses formal talks on a political transition between the President Bashar al-Assad led Syrian government and opposition in early January 2016.

Calls for implementation of a ceasefire in parallel with the talks on a political transition. Read More