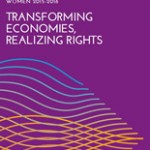 The Department of Economic and Social Affairs of the United Nations on 20 October 2015 released a report entitled The World’s Women 2015: Trends and Statistics. The report provides an update of the statistics and indicators on the situation of women and men around the world covering gender-specific information on eight key areas-population and families, health, education, work, power and decision-making, violence against women, environment and poverty.