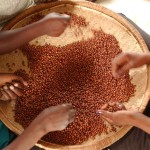 The UN has launched the International Year of Pulses 2016, aiming to raise awareness of the many benefits of pulses, boost their production and trade, and encourage new and smarter use throughout the food chain. Running under the slogan ‘nutritious seeds for a sustainable future’, the UN General Assembly declared 2016 the International Year of Pulses.

Pulses are plants which produce legumes such as peas, beans, or lentils.

Pulses are important food crops for the food security of large proportions of populations, particularly in Latin America, Africa and Asia, where pulses are part of traditional diets and often grown by small farmers. Read More