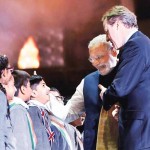 Telecom giant Vodafone’s pledge of investing £1.3 billion (Rs 13,078 crore; at £1= Rs 100.6) in its India services was one of the big-bang investment proposals announced by British and Indian companies during Prime Minister Narendra Modi’s visit to the UK. On Friday, Britain and India welcomed £9 billion (Rs 90,540 crore) in more than 20 deals and collaborations.A statement from British Prime Minister David Cameron said: “During this visit, British and Indian companies are announcing new collaborations, together worth more than £9 billion.”
India and Britain had shown political will to push their bilateral relations and it was now for the business communities of the two sides to take them forward, Modi said in an address to the UK-India CEO forum on Friday. “India and the UK are economically made for each other. This relationship has to be driven by private sector CEOs,” Modi said…Read More