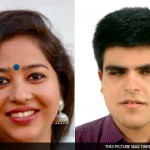 Two Indians have won the Queen’s Young Leaders award in the UK for their exceptional work in transforming the lives of others and making a lasting difference in their communities.

Kartik Sawhney, 21, and Neha Swain, 28 from India are among 60 others who won the Queen’s Young Leaders award 2016 which will be presented by the British monarch at a gala ceremony in Buckingham Palace in June next year.

Kartik, who was born blind, has been acknowledged for his exceptional work highlighting universal access to education for all. Read More