Home » Current Affairs » This Republic Day, French troops to be part of parade

This Republic Day, French troops to be part of parade 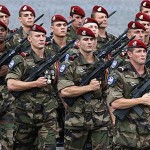 On January 26th this year, India’s 67th Republic Day, the country will witness something unique — a foreign contingent marching with Indian troops in the Republic Day parade. French President Francois Hollande is this year’s chief guest. While the Indian and French heads of state oversee the celebrations, Indian and French troops will together march down Rajpath.

A 56-member French contingent of the 35th Infantry Regiment, 7th Armoured Brigade is already in Rajasthan to take part in a joint exercise. Known as “Shakti 2016”, it will focus on counter-terrorism and counter-insurgency.