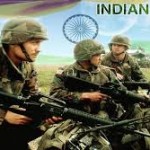 Militants on Wednesday morning attacked an Army camp in Tangdhar sector near the Line of Control (LoC) using small arms and under barrel grenade launchers, killing a jawan and injuring four others. “There was a stand off fire from Kalsuri Ridge (in Tangdhar sector) towards an army camp this morning,” an army official said.He said there was a brief lull before the militants opened fire again, triggering off a gunbattle, which was going on till last reports came in. The official said the militants seem to be heavily armed as they used small fire arms and UBGLs to carry out the attack. “So far there are no casualties reported,” he added…Read More