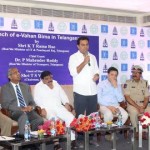 Government of Telangana has launched e-Vahan Bima Scheme to issue motor insurance policy in digital form. The scheme was launched by Information Technology Minister K T Rama Rao in the presence of T S Vijayan, Chairman of Insurance Regulatory Development Authority (IRDA). With the launch of this scheme, Telangana became the first state in the country to legally accept motor vehicle insurance policy in digital form.

As per the e-Bima scheme, an electronic motor insurance policy is issued in digital form with Quick Response (QR) code.