Tech companies drive closer to goal of producing their own cars 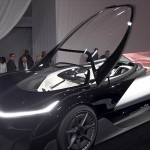 Two days ahead of the International Consumer Electronics Show (CES) in Las Vegas, the US, Chinese streaming video company Le Holdings (Beijing) Co, or Letv, announced it had made a cooperation agreement with a Silicon-Valley start-up to produce cars.The deal, which Letv signed with electric car start-up Faraday Future (FF), marks another step toward Letv’s ambition of making electric cars of its own. At a press conference late on Monday, FF showcased its first electric concept car – the FFZERO1, according to a statement that Letv released on Tuesday.