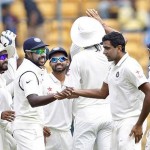 Indian Test team led by Virat Kohli has climbed to the top of the International Cricket Council ’s Test Rankings after South Africa crashed to a 0-2 series defeat against England in Johannesburg. India, who lost their top ranking to England after their 0-4 whitewash in 2011, got back to the pinnacle by virtue of their crushing 3-0 series win against the Proteas at home, last December. India now have 110 ranking points and have one point more than Australia, who are second in the list with 109 points.

South Africa are now third in the rankings. The joy of reaching top spot for India can be shortlived if Australia win their home Test series against New Zealand by 1-0 margin as the Aussies will then displace the Indian team from its numero uno position.