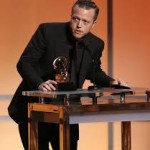 Taylor Swift kicked off the Grammy Awards with performance of her latest hit single, “Out of the Woods,” while Kendrick Lamar collected his fifth trophy for the night. Lamar won best rap album for his sophomore effort, “To Pimp a Butterfly.” It was the first award televised Monday. “Hip-hop, Ice Cube, this for hip-hop, this for Snoop Dogg …this for Nas. We will live forever, believe that,” said Lamar, who also won best rap song, rap performance, rap/sung collaboration and music video earlier in the day.

Read more at The Indian Express