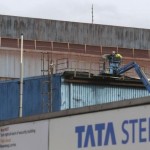 Tata Steel will offer 3 million pounds ($4.62 million), to be matched by government, for job creation in Britain’s Scunthorpe where its steel plant is to restructure, the two said in a joint statement.

Tata Steel, Britain’s biggest steelmaker, may cut about 1,200 jobs as part of plans to restructure there.

“Tata Steel’s regeneration arm UK Steel Enterprise has pledged 3 million pounds to support job creation in Scunthorpe, on top of 10 million pounds it has already earmarked to help regenerate UK steel communities over the next five years,” the government and Tata Steel said.

Britain’s largest trade union Unite said in a statement: “This is a woefully inadequate response from the government to support a town and industry which is being rocked by job losses”.

The steel industry’s largest union, Community, said the action was premature. “There is still a consultation process to go through,” it said in a statement.

The crisis in Britain’s steel sector escalated further this week as Tata Steel blamed its decision to cut British jobs on a flood of cheap imports, particularly from China.

Workers on Friday held a protest in Oldbury in the West Midlands where steelmaker Caparo Industries, which employs about 250 people, this week went into administration.

They called for government action to save Britain’s steel industry.

This month alone, over 4,000 UK steel jobs have been lost or are now at risk, with the country’s steelmakers and unions pinning much of the blame on China.