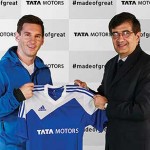 Homegrown car maker Tata Motors on November 2, has signed-up football player Lionel Messi as its brand ambassador. In a major marketing initiative the company has signed-up the four-time winner of the best football player of the world award and Argentine captain Messi to promote and endorse passenger vehicles, globally.

The idea is to engage with young people and that football and Messi had a lot of connect with the youth. As a start up, Tata Motors will first roll-out the association campaign, #madeofgreat, starring Lionel Messi today, on 3rd November. This is the first time ever that the company’s passenger vehicle business will be undertaking an overall brand association campaign – ‘What drives us from within is what makes us great’, with a brand ambassador.

This is the first campaign in the series and many more will unfold as we move on in this long-term association. As the company looks to expand its footprint across the globe, Messi’s unique ability to appeal globally makes him an ideal person to represent the brand internationally.