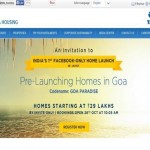 The initiative is in line with the company’s target to generate over 30% of its overall sales online in the next five years. Currently, the company has sold around 2,000 homes online in the last three years, accounting for nearly 10% of its total sales.

Through this new campaign titled ‘Social sell’ on Facebook, the company plans to sell around 250 units of its new five-acre residential project in Goa called Codename —Goa Paradise. The company said such an initiative of directly selling homes through a social networking site is first of its kind in India. Read More