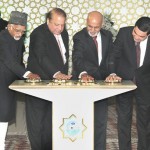 Vice President Hamid Ansari, Pakistan PM Nawaz Sharif and leaders from Turkmenistan and Afghanistan on Sunday broke the ground in Turkmenistan for the ambitious USD 7.6 bn TAPI pipeline project which will provide energy-hungry India gas to run its power plants.

Ansari flew to the ancient city of Mary, 311 km from the capital Asghabat, which was part of the old Silk Route, to attend the ground-breaking ceremony of the 1800-kilometre-long TAPI gas pipeline in the presence of Afghan President Ashraf Ghani and Turkmenistan President Gurbanguly Berdimuhamedow.

They pushed a button which started the welding process of pipes. They later signed the pipe and also signed a document which was put in a capsule and placed under the ground.

At the ceremony, Berdimuhamedow hoped that the project would get operationalised by December 2019. Read More