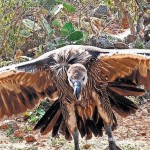 After a ban on multi-vial drugs of Diclofenac by the Centre, now the State government has withdrawn Ketoprofen, a non-steroid anti-inflammatory drug (NSAID) used extensively for veterinary purposes to save the vulture population in the three western districts.

Despite the first batch of the drug being supplied to all the districts beginning May 2015, the Directorate of Animal Husbandry has decided to discontinue the use of Ketoprofen in Erode, Coimbatore and The Nilgiris, where the vulture population was in danger, sources say. Read More