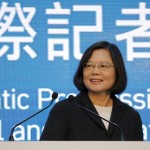 Taiwan’s independence-leaning opposition leader Tsai Ing-wen has won the island’s presidential election after the ruling party admitted defeat. Tsai will be thrust into one of Asia’s toughest and most dangerous jobs, with China pointing hundreds of missiles at the island, decades after losing Nationalists fled from Mao Zedong’s Communists to Taiwan in the Chinese civil war. She will have to balance the superpower interests of China, which is also Taiwan’s largest trading partner, and the United States with those of her freewheeling, democratic home.

Tsai risks antagonising China if she attempts to forcefully assert Taiwan’s sovereignty and reverses eight years of warming China ties under incumbent President Ma Ying-jeou of the Nationalists, whose forces retreated to Taiwan in 1949. There was no immediate reaction from Beijing.