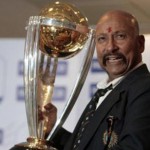 The Board of Control for Cricket in India (BCCI) has nominated former India wicket keeper Syed Kirmani to receive the Colonel CK Nayudu Lifetime Achievement Award for the year 2015. The Awards Committee met at Cricket Centre, BCCI headquarters – Mumbai and unanimously nominated Kirmani for Award for 2015. The committee consists of BCCI president Shashank Manohar, secretary Anurag Thakur and N Ram, editor – The Hindu.

The BCCI celebrates the birth centenary of Col. Cottari Kanakaiya Nayudu, the country’s first Test captain, by instituting an annual Lifetime Achievement Award, to honour individuals for their unparalleled contribution to Indian cricket, on and off the field. The Award comprises a trophy, citation and cheque for Rs. 25 lakhs. Read More