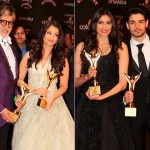 The Stardust Awards were held in Mumbai on December 21. Deepika Padukone and Amitabh Bachchan won the major awards this year as Big B won the Best Actor of the Year (male) award while Deepika won the Best Actor of the Year (female) award for Piku. The Best Film award went to Salman Khan’s Bajrangi Bhaijaan while Harshaali Malhotra, who played the role of Bhaijaan‘s Munni in the film, won the Breakthrough Performance by a Child Artiste award.