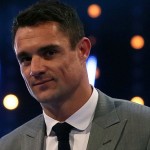 Rugby World Cup-winning fly-half Dan Carter has been named 2015 BBC Overseas Sports Personality of the Year. He beat Novak Djokovic, Katie Ledecky, Usain Bolt, Jordan Spieth and Serena Williams after the award was decided by a public vote for the first time. Carter, 33, was an integral part of the New Zealand team that beat Australia 34-17 to win the World Cup in October. The highest ever points scorer in Test rugby, he won the World Player of the Year award for a third time in 2015.

The award was one of the BBC’s Sports Personality of the Year awards, which will be given at a ceremony hosted Gary Lineker, Clare Balding and Gabby Logan will take place at The SSE Arena in Belfast on Sunday, December 20. Read More