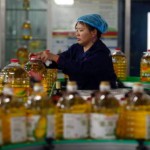 South Korea on Monday (Nov 30) ratified a free trade agreement (FTA) with China that would remove most tariffs between Asia’s largest and fourth-largest economies.

The pact, signed in June, was passed by parliament with a 196-33 majority – although it still needs China’s ratification in order to take effect.

The green light came after the Seoul government promised to provide about one trillion won (US$865 million) in direct financial support for farmers and fishermen who argue that their livelihoods will be severely affected by the deal. Read More