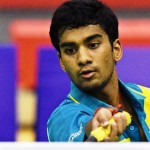 India’s Siril Verma climbed up a whopping 11 places to occupy the number one spot in junior men’s singles category in the Badminton World Federation (BWF) rankings issued on Thursday.

Verma, the current world junior championships runners-up and regarded as the next big thing in Indian badminton, is ahead of second placed Toma Junior Popov of France while another Indian Chirag Sen occupies the third spot.