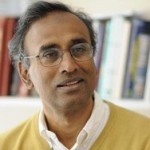 Sir Venkatraman Ramakrishnan on 1 December 2015 assumed Presidency of the Royal Society in London. He was elected to the office in March 2015 by the society’s council and will serve for up to five years.

With this appointment, he became the 61st president of the society. And, he joined the elite club that has included Christopher Wren, Samuel Pepys, Isaac Newton, Joseph Banks, Humphry Davy, and Ernest Rutherford.

• He studied how genetic information is translated by the ribosome to make proteins and the action of antibiotics on this process. Read More