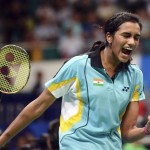 Two-time World Championship bronze-medallist, India’s P.V. Sindhu made a rousing start to the new season as she clinched the Malaysia Masters Grand Prix Gold title after defeating Scotland’s Kristy Gilmour in straight games in the final in Penang on Sunday.The third seeded Indian had lost to Gilmour in 2013 French Open in their only meeting but today she showed why she is considered to be one of India’s most revered women’s singles shuttler as she avenged her loss with a dominating 21-15 21-9 win in a 32-minute clash to clinch her fifth Grand Prix Gold title.