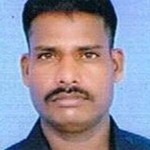 Three days after he was rescued after being buried in ice and snow for six days in Siachen Glacier, Lance Naik Hanaman thappa Koppad died at the Army Research and Referral (RR) Hospital in Delhi on Thursday. An Army statement said he died at 11.45 am. He had multiple organ failure. His family members were at the hospital at the time, sources said. His remains were flown to Hubli in Karnataka. The last rites will take place on Friday.