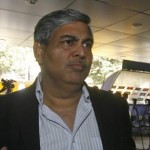 Shashank Manohar has been elected unopposed as President of Board of Control for Cricket in India (BCCI) for the second term. He belongs to Vidarbha Cricket Association and was elected by Special General Meeting (SGM) of BCCI. The meeting was called to elect President due to sudden demise of Jagmohan Dalmiya, who had served President for 7 months after winning election in March 2015.

In this by-election, Shashank Manohar was the only candidate in the fray and was unanimously backed by all the 6 units of East Zone as it was this zone’s turn to elect President this time.

Shashank Manohar by profession is a prominent lawyer. Earlier he had served as the 29th President of the BCCI from 2008 to 2011. As a cricket administrator he is known for his impeccable clean image and track record & integrity in cricketing circles. Read More