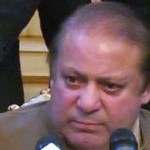 Pakistani Prime Minister Nawaz Sharif said on Friday Pakistan would be forced to take “countermeasures” to deter against any attacks, given a major arms buildup by neighbouring India and its refusal to resume talks over Kashmir. “While refusing dialogue, India is engaged in a major arms buildup, regrettably with the active assistance of several powers,” Sharif said in a speech to the U.S. Institute of Peace in Washington.

“It has adopted dangerous military doctrines. This will compel Pakistan to take several countermeasures to preserve credible deterrence.”

Sharif charged that a “cancellation” of talks between the nuclear-armed countries had been followed by increased ceasefire violations by India across the Line of Control dividing Pakistani and Indian Kashmir.

He said there had also been “a stream of hostile statements by the Indian political and military leadership.”

Sharif, who held talks with President Barack Obama in Washington on Thursday, said there was a need to resume dialogue with India and urged the United States to be more understanding of Pakistan’s position in the interests of regional stability.

“I believe a close review of some of the existing assumptions and analysis and greater attention to Pakistan’s views and interests would be useful in enabling Washington to play a constructive role in averting the ever present danger of escalation and promoting stability in South Asia,” he said.

Sharif did not define “countermeasures,” but on Thursday, Obama urged Pakistan to avoid developments in its nuclear weapons program that could increase risks and instability.

Washington, which like Russia is major arms supplier to India, has been concerned about Pakistan’s development of new nuclear weapons, including small tactical nuclear weapons.

It had been trying to persuade Sharif to make a unilateral declaration of “restraint” on nuclear development, but Pakistani officials said Islamabad will not accept limits to its weapons program and argued that smaller tactical nuclear weapons are needed to deter a sudden attack by India.

Sharif and Indian Prime Minister Narendra Modi agreed in July to revive talks, but escalating tensions over Kashmir, which both countries claim in full but rule only in part, derailed the plans.

Earlier on Friday, India’s foreign ministry spokesman welcomed Pakistan’s pledge in a joint statement with the United States on Thursday to fight militant groups Delhi suspects of attacking Indian targets, but ruled out any third-party mediation to end the Kashmir dispute.

Mark Toner, a U.S. State Department spokesman, told a regular Washington news briefing that Pakistan’s tensions with India needed to be addressed and this would be best done “through continued dialogue between the two countries.”

In Thursday’s statement, the United States and Pakistan expressed their commitment to the Afghan peace process and called on Taliban leaders to enter direct talks with Kabul, which have stalled since inaugural discussions in Pakistan in July.

On Friday, Sharif said he had told Afghan President Ashraf Ghani Pakistan was prepared to help revive the talks. But he added: “We cannot bring the Taliban to the table and be asked to kill them at the same time.”

Sharif did not elaborate, but was apparently referring to U.S. calls for Pakistan to crack down on Taliban sanctuaries within Pakistan…Read More