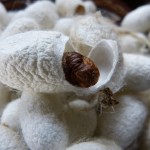 Scientists at the University of Leicester have developed viruses that could halt the decline of ‘Muga’ caterpillar in India which produces one of the finest silks in the world. Muga caterpillars, which produce a highly valuable silk, are dying from bacterial infections, in Assam. Researchers claim that they have developed viruses that could protect the silkworms from disease and as a result could save the Muga silk industry. Muga silk is produced only in the North East India as the silkworms form their cocoons. The caterpillars have been in decline over the last few years because they are eating infected leaves.

Dr Mahananda Chutia, a visiting academic from Assam at the university who is employed by the Indian government, said that the pesticides sprayed on tea leaves must have reached the silkworms and weakened them.