Saudi Arabia reopens its embassy in Iraq after 25 years 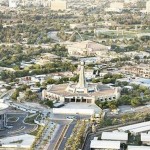 Saudi Arabia has reopened its embassy in Iraq, a quarter of a century after Riyadh broke off diplomatic relations with Baghdad following the Iraqi invasion of Kuwait.

The official further said that the Saudi ambassador to Baghdad was due to arrive by Thursday and would attend an official opening ceremony.

Reports say that a Saudi consulate is expected to open later in Erbil, the capital of Iraq’s autonomous Kurdistan Regional Government. Read More