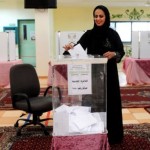 Women have been elected to municipal councils in Saudi Arabia for the first time after a ban on women taking part in elections was lifted.

At least four women were elected, the state-run Saudi Press Agency (SPA) reported. Other news agencies put the number between nine and 17.

Women were elected in Mecca, Jawf and Tabuk, SPA said.

The vote is being seen as a landmark in the conservative kingdom. However, the councils have limited powers. Read More