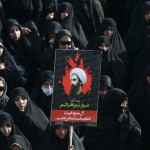 Saudi Arabia has cut off diplomatic ties with Iran following the storming of its embassy in Tehran. Iran’s envoy has been given 48 hours to quit the Saudi kingdom. The escalating row between the rival Middle East powers over Saudi Arabia’s execution of a Muslim Shia cleric has caused alarm in the US and triggered a jump in the price of oil. It’s feared the diplomatic rupture between Sunni-ruled Saudi Arabia and Shia-ruled Iran may snowball across the Middle East where the two powers back opposing sides in many destructive wars.

Iraq, whose Shi’ite-led government is close to Iran, religious and political figures have demanded that ties with Riyadh be severed, calling into question Saudi attempts to forge a regional alliance against ISIL militants which controls swathes of Iraq and Syria.