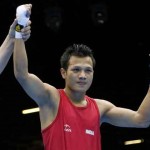 Asian Games bronze-medallist L Sarita Devi (60kg) returned to competitive boxing after her one-year ban with a resounding victory in the opening contest of the training-cum-competition assignment in the Chinese city of Qian’an.

Sarita, who served a one-year ban for her emotional outburst at the Asian Games after a controversial semifinal loss, defeated Mongolia’s Sowoderden 3-0.

In fact, the Indian boxers put up a strong show on the opening day of competitions against teams from hosts China, Mongolia, Thailand and Korea. Read More