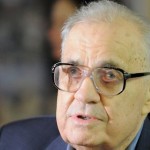 One of the iconic Russian movie directors from the Soviet era, Eldar Ryazanov, has died. He was 88. According to Russian news agency reports, Ryazanov died at a Moscow hospital of cardiac failure following a lengthy illness.

Born in Samara in 1927, Ryazanov wrote or co-write many of his movies. He became one of the Soviet Union’s biggest hitmakers of the 1960s, ’70s and ’80s. Ryazanov’s first narrative film, the 1956 Carnival in Moscow(Karnavalnaya Noch), was a breakout success, followed by a string of crowd pleasers, including Old Men – Robbers, Unbelievable Adventures of Italians in Russia, Office Romance, A Railway Station for Two, A Cruel Romance, Watch Out for the Automobile, Garage, A Forgotten Tune for the Flute and Say a Word for the Poor Hussar. Read More